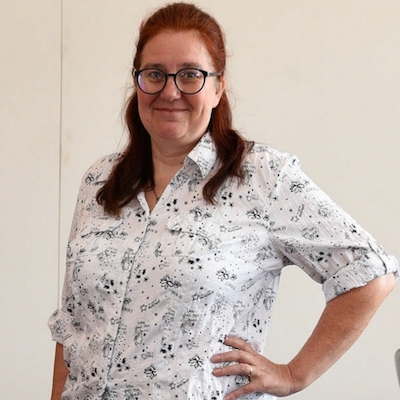 The designer has been working in the project business for engineering companies for many years – with conviction and commitment.

“We have no sanitary facilities for you...” When Margit Kubale, then 17 years young, wanted to train as a carpenter, she was confronted with this argument, among others. Discussions don't help, there is no getting through to the companies. So she changes vocational direction. Margit Kubale swaps wood for metal, chooses the profession of a precision mechanic  and an apprenticeship in the company. “It took a bit of courage,” she says in retrospect. With her, another woman and about 70 men are among the trainees in her year. Things go well. She never feels rejected by her colleagues, but instead is treated with openness and respect. “Of course you have to get down to work and you can't be squeamish. And there is some earthy language used.” But she can deal with that well  also because she is already active in the DLRG back then. “It's just that the tone is sometimes a bit rough, but comradely.”

A few years after graduating, she completes technical training in mechanical engineering and precision engineering. Since then, she has designed, among other things, automatic transmissions, special machines for processing miniature electronic components, washing systems, lifts  in some cases including the design of the motors. She is also happy to take on project management. She sees providing input and generating progress as an essential task for the experts of engineering companies. “I find it fascinating to stand at a plant later, to see it working and to know that an essential part of this functioning is my own work!”

Performance in a team

Meanwhile she has been active as a design engineer for 25 years and is still a fan of exciting project assignments, intelligent software use and active teamwork. “Exchange within the team is important for good products! You can't have individuals flying blind here. After all, the machines are complex  in terms of mechanics, software, electrical engineering and even more so in terms of the interaction between these fields.” She expects a lot from those around her and is flexible when necessary. So naturally she moved from Berlin to Augsburg for a few months under contract from ep. “I like variety and I like to get involved in new fields. I want to have to think and be challenged!”

The joy of innovation

Does Margit Kubale consider herself brave? She hesitates. Open-minded and hands-on is more appropriate. Where it makes sense, she initiates optimisation processes, often, but not always, with the desired response: “In one case, it was a matter of switching from conventional to sinter printing prototypes. Although I was able to prove the positive effects, the reservations were too great!” Based on their experience, many decision-makers rely on tried and tested methods, perhaps out of convenience or lack of courage. “One often feels the worry of investing in preparations with a not entirely certain outcome. I sometimes wish for more innovative spirit!” She has had positive experiences in this regard in the current project at AMBEG. The innovative medium-sized company encourages suggestions from the team and is happy to implement good proposals. This is another reason why Margit Kubale feels very comfortable in this environment.

And privately? Margit Kubale is the mother of two daughters, one of whom is studying mechanical engineering and the other is still at school. “My husband was very committed to the children and I went back to work early both times. I've never been 'just a mother'.” Nevertheless, she puts her family before everything else. A common thread in her upbringing  consistency and serenity, leisure activities instead of a big career  all these are common principles. She also made her dream of working as a carpenter come true at home. Her husband, a naval architect and, in her opinion, the more creative designer, designed pieces of furniture, she constructed them and they both assembled them. There is hardly anything else in her apartment, she says. Slowly there is also more time for each other. The daughters were both in South Africa for a year. They are self-employed and still consider their home as a permanent anchor and camping with their parents in their VW bus as a worthwhile activity. “Being open to other cultures and people is important to us,” says Margit Kubale. “That you can also understand a bit of sarcasm. And that you have an opinion that you have researched yourself. Don't believe everything you're told  that's essential!”

Margit Kubale has been working for ep for a few weeks at AMBEG Dr. J. Dichter GmbH in Berlin, a leading manufacturer of glass processing machines. There she is currently adapting a plant to new requirements with regard to the motor and gearing

Be curious about ep.. We are about you!

Do you have questions?